Reuters AlertNet has an update on the aftermath of Tropical Storm Hannah that hit Haiti on Tuesday, Sept 2.  MSF is on the ground.  Anyone else?  Please let us know.

‘Half a million are stranded by India flood’

The International Herald Tribune is running a story on the flooding in Bihar province, India:

Half a million victims remain stranded after last week’s floods in northern India destroyed hundreds of rural villages. Aid workers say food and drinkable water are running out in overcrowded camps that house thousands of displaced farmers and their families.

Many flood victims in remote corners of Bihar, one of India’s poorest and most populous states, have gone without food for days, government officials and aid workers said. They may have to wait in trees and on rooftops for several more days before help arrives. Meanwhile, aid workers worry that at any time contagious diseases could break out in the makeshift refugee camps, where a quarter million people are living.

The flooding has affected more than three million people. It began two weeks ago when the Kosi River breached a dam across the border in Nepal and overflowed its banks downstream in India. The Kosi often floods the Bihar plains during monsoon season, but the flooding this year has been the worst in five decades, in part because the swollen river reached villages rarely threatened by high water that were unprepared to deal with it. 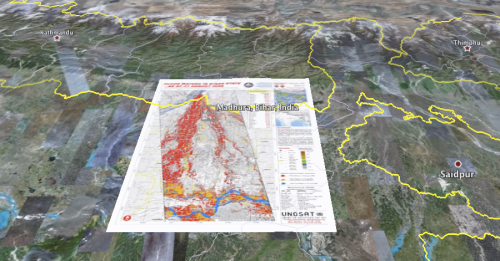 UNOSAT has maps of India’s Bihar region available for download.  The recent flooding of the Kosi River has displaced tens of thousands of individuals in both India and Nepal.  Reuters has more here and MSF says it has people on the ground.  Here is BBC coverage of the tragedy:

UPDATE #1: Sorry, folks, I got a bit ahead of myself and with too many tabs opened ended-up posting the wrong map.  I have corrected the issue (Thanks, Kelly!) and the link is good.

UPDATE #2:  Einar Bjorgo of UNOSAT has provided a link to download a KMZ file of the overlay.  Stefan Geens over at Ogle Earth has also created a KMZ file for download.

UPDATE #3: Google LatLong Blog has integrated new maps and imagery into a KML file.  Download it here and read the entire post. (9/26/08)